David’s service to his country, hard work, and academic success was only the beginning of his accomplishments.

In 1965, David accepted a position as Vice President of Alcorn International Corporation, an American engineering and construction company. Alcorn operated globally as a technical service contractor specializing in the engineering design and construction of petroleum refineries and petrochemical plants, and had offices and manufacturing facilities throughout the United States and Europe.

During this period, he also simultaneously served as President of Becco, Inc., the construction arm of Alcorn, which performed construction and maintenance activities for refinery and petrochemical plant customers. He relocated to the company’s New York headquarters, holding several positions before becoming President and Chief Executive Officer just five years later, at the age of 30.

After negotiating the sale of Becco to LTV, Inc. of Dallas, David accepted a position as the Head of European Operations with Fluor Corporation of Irvine, California, an engineering construction company. Fluor operated globally as a technical service contractor, specializing in the engineering design and construction of petroleum refineries and petrochemical plants for the petrochemical industry. He was also in charge of a project to acquire or merge Flour’s expanding global business. This resulted in a merger of Fluor with the Daniel Corporation of Greenville, North Carolina, and the new company became known as the Flour-Daniel Corporation. After the merger, David continued to provide consulting services to Fluor.

In 1972 when the farm and ranch industries were suffering financially, David founded Granada Corporation, as a vertically integrated technical-service contractor, to specialize in the application of biotechnology and genetic engineering for the agriculture industry. Initially Granada worked with cattle to maximize efficiencies of production, improve producer economics and ultimately improve the quality of the resulting food.

By 1985, Granada led the world in biotechnology services for agriculture with over $1 billion in revenues and over 4,000 employees. David’s vision for Granada was based on his beliefs that agriculture needed to adapt to new technologies and that biotechnology provided the key to improve production profits. David’s work significantly improved the quality of beef and dairy products we consume today. 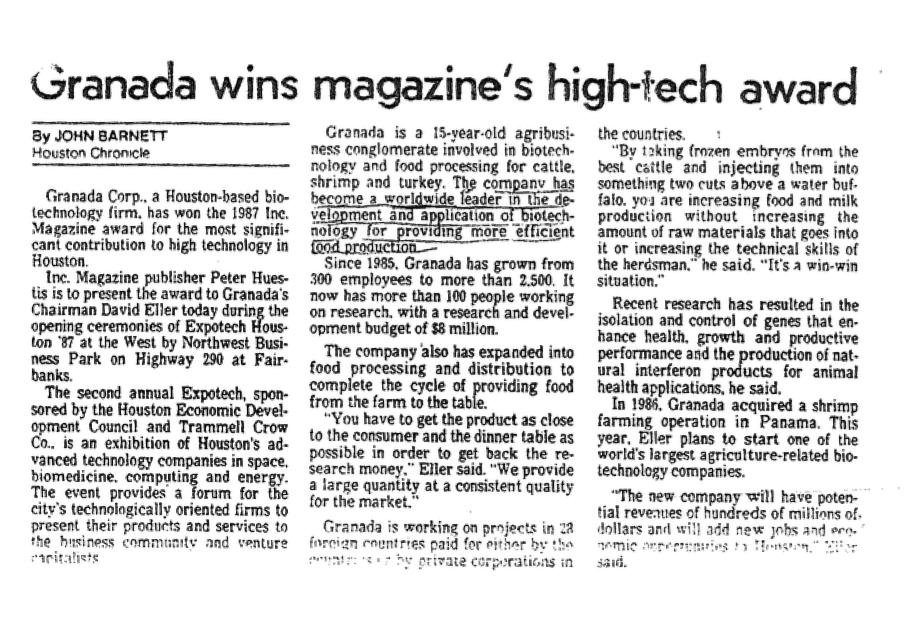 While David was Chairman and Chief Executive Officer, Granada accomplished many significant milestones, some of which are as follows:

In 1992, after selling his interests in the two companies that he founded, Granada BioSciences Inc. and Granada Foods Corporation, David began to apply the same technologies to the mariculture industry, specifically in the area of shrimp mariculture. He established a company called Agromarina de Panama S.A. in the Republic of Panama as the center of mariculture operations due to the favorable business and climatic conditions there.

The company quickly grew to become the largest vertically integrated shrimp mariculture production operation in the Western Hemisphere, providing genetically improved live shrimp larvae to shrimp farms located not only in Panama, but also in other countries such as Ecuador and Colombia. In addition, the company annually exported approximately 10 million pounds of finished frozen shrimp to markets in Asia, Europe, South America and the United States. The company accomplished many significant milestones, some of which are as follows:

Utilizing his educational background in geological engineering, David founded and developed American National Petroleum Company in 1978. After two years of operations, the company completed an initial public offering (IPO) of its stock that sold on the NASDAQ Exchange.

As Chairman and CEO, he directed the planning and financial management of the overall operations of the pubic company and its five wholly owned subsidiaries, including exploration and development activities in 11 states and the Louisiana and Texas offshore waters of the Gulf of Mexico, and the company’s pipeline operation. Seminal achievements of the company under his leadership were as follows:

In 1994, David founded North American Energy Inc., serving as its Chairman and CEO. In this capacity, he managed the operations of the company, and he continues to do so with oversight of its oil and gas exploration and production in the Texas and Louisiana Gulf Coast Areas. Some of the milestones are as follows:

In 1996, David began as an advisor to the Chief Operating Officer of DuPont Pharmaceuticals Company, a multibillion, multinational, research-driven pharmaceutical company.

In 1999, David was appointed President of DuPont Pharmaceuticals Company—Europe. As President, he was responsible for general and financial management of DuPont’s European, African and Internal Operations. Through its European subsidiaries, DuPont focused on discovering, developing and delivering pharmaceuticals to treat today’s unmet medical needs in the fight against cancer, cardiovascular disease, central nervous system disorders, HIV, and arthritis-related disorders. During the years that David was associated with the company, he was responsible for the following:

After retiring from DuPont in 2001, David combined many of his holdings into Eller Corporation, a broad-based company having operations in a variety of businesses, including energy, agriculture, real estate development, wireless high speed internet broadband services and management consulting services. He continues to serve as Eller Corporation’s Chairman and CEO.

In 2001, he acquired International Tool & Supply Company, an international oil field supply business operating throughout Latin America with principal offices and manufacturing shops in the countries of Venezuela, Peru and Mexico. He continues to serve as its Chairman and Chief Executive Officer.

During the same period, he continued to serve as Chairman and CEO of Eller Corporation and North American Energy, International Tool & Supply, North American AgriSystems, Inc. and Cobalt Broadband Corporation.

In 2011, former Texas Governor Rick Perry approached David about using his entrepreneurial background and experience in bioscience to be a part of Perry’s vision to make Texas the “stem cell capital of the United States.” With the goal of helping individuals regain their quality of life, David founded Celltex Therapeutics Corporation. Celltex focuses on offering individuals a safe and effective method of utilizing their own adult mesenchymal adipose-derived stem cells for therapy for various medical conditions. Using its proprietary technology, the company quickly established itself as a leader in providing services for the rapidly expanding field of regenerative medicine.

In 2013, Celltex expanded its laboratory and management staff to continue its role as the leader in the cryogenic storage and production of adipose adult mesenchymal stem cells.

David and the Celltex team continue to work diligently toward the goal of making access to the incredible promise of stem cell therapy available to everyone.