His business associates and friends have best described David as an entrepreneur. His achievements are many in regard to civic, philanthropic, religious, fraternal, and political activities. He is a founding patron of the Texas Business Hall of Fame. In 1982 he served as chairman of the American Cancer Society. David Eller’s career accomplishments have been recognized through numerous awards and honors.

In 2016, David Eller received the distinguished alumnus award from Texas A&M University, which is the highest honor bestowed by the university on a former student.

In 2015, he was honored by Virtuousi of Houston as a Top Entrepreneur for his work in founding and leading Celltex.

January 27, 2015 David was presented with the Eppright Distinguished Donor plaque from A&M. This award is symbolic of loyalty and support of the athletic program at Texas A&M. Recipients who earn this distinction have lifetime giving of $100,000 and beyond.

David Eller was included in the 2007-2008 and 2008-2009 editions of The Heritage Registry of Who’s Who. Inclusion is based on recognition of accomplishments, contributions to organizations and efforts to better the American Business Community. Each edition contains thousands of biographical profiles highlighting each selected member. 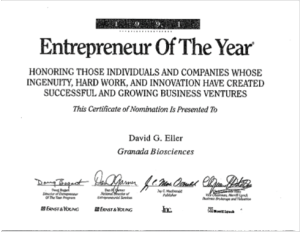 In 1991, David was presented Entrepreneur of The Year for his work with Granada Biosciences.

The National Chapter of Beta Gamma Sigma granted him the “Medallion for Entrepreneurship” in 1986. The Houston Business Journal awarded him their 1988 “Enterprise Award.”