David Gallaway Eller was born March 13, 1938 in Mexia, Texas to James Marion Eller Sr. and Myrtis Gallaway Eller. All of David’s youth was spent in Mexia, where he attended Mexia High School. He graduated as a distinguished alumnus with honors, just two months past his sixteenth birthday. He entered college the same year.

David attended Texas A&M University, known at the time as the Agricultural & Mechanical College of Texas, beginning in the fall of 1955. David’s college years were busy and marked by hard work and many accomplishments.

While attending Texas A&M, David was a member of the Aggie band as well the Cadet Corps. He held leadership positions each year before becoming a Company commander at the time of graduation. 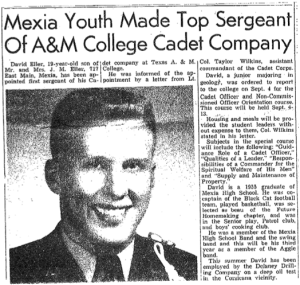 During the summer between his freshman and sophomore years, David worked the night shift at Big Six Drilling Company as a roughneck on a rig, drilling for oil at the current location of the Astrodome, as well as other locations in Liberty and Tomball, Texas. In the summer between his sophomore and junior years, in pursuit of his career in geological engineering and the oil industry, David was employed by the M. J. Delaney Drilling Company near Corsicana, Texas, where the company was doing deep oil drilling tests. David worked the night shift and during the day he attended courses at a local college in Corsicana.

David graduated from Texas A&M University in 1959 with a Bachelor of Science Degree in Geological Engineering and Business Administration. He received a commission as an officer in the Corps of Engineers, and entered the United States Army shortly thereafter.